What is the largest tree in the world? 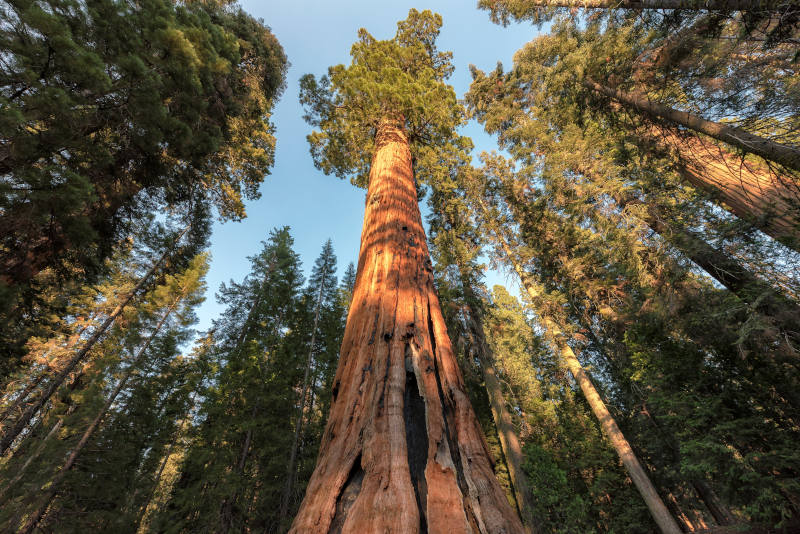 As a species, giant sequoias are the largest on earth. They are one of three redwood species (the coast and dawn redwood being the other two) growing naturally in a narrow 60-mile band on the western slopes of the Sierra Nevada Mountains. Given the right conditions over millennia, they can live for more than three thousand years and thrive in the warm, humid climate off the pacific coast. Incredibly, they can grow taller than 78 metres with a girth of more than 7 metres from a seed only 1 cm in length! The oldest known giant sequoia tree is 3,200 to 3,266 years old, determined by dating its tree rings.

Redwoods have tannic acid in their sap, and their bark is unusually fire resistant, protecting them from wildfire damage. They are popular as an ornamental tree and successfully grown in Europe, the Pacific Northwest and southwest British Columbia.

General Sherman is listed in the Guinness World Records as the world’s largest living tree by volume and stands in Sequoia National Park in California. The tree is clocked at approximately 2,100 years old growing to an astounding height of 82.6 metres (271 feet) with a circumference of 31 metres (102 feet). Its only competitor – the Maple Creek Tree, once larger than General Sherman, was logged in the 1940’s. Although not as large by volume, the tallest tree on earth is a coast redwood named Hyperion, soaring to a height of 115 metres (379 feet)!

Unfortunately, these massive trees are endangered, but now in the capable hands of the US Forest Service. A new management plan was completed in 2012 for their protection, restoration and preservation.

As we move forward with climate change and expanding populations, it is important to do our part in taking care of our trees. We may not have giant sequoias in our back yards, but we do have an abundance of trees in urban forests standing on private land that are within our reach for management. British Columbians are also proud of the Pacific temperate rainforest ecoregion, and Kitimat-Stikine’s Great Bear Rainforest. We will tell you about this natural wonder in our next article.

The trees on your property may not be in the Guinness World Records, but we know they’re famous to you. Regular tree pruning, soil testing and root fertilization are just part of our plan for keeping your trees healthy and we invite you to call us for a consultation.